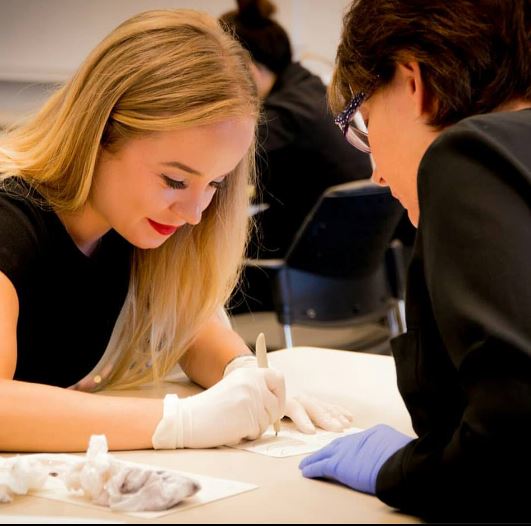 What is the Go-To First Step Tool in Microblading?

Eyebrows microblading is a semi-permanent makeup procedure using a specialized hand-held tool with multiple blades to insert pigment into the eyebrow area and draw hair-like strokes. As a semi-permanent procedure, artists have to work in the skin to make the effect long-lasting.

Microblading procedure utilizes a hand-held tool, which is impregnated with ink, utilized to deposit pigment to the epidermis in small strokes, mimicking the appearance of individual hairs. In World Microblading’s training conducted globally, students are taught to use the Irina Chen First Step Tool. It is the go-to tool for those who want to use the Dual Blade Technique, pioneered by World Microblading’s founder, Irina Wynn. The Dual Blade Method is the technique of using a hand-held tool that holds the blade and needles to create thin and natural-looking strokes, mimicking the appearance of individual hairs. You won’t even distinguish the ink from the natural hairs in the brows.

In order for every microblading artist to perform the thinnest strokes during a microblading procedure, one must utilize tiny needles formed in a line at the tip of a hand-held tool —Irina Chen First Step Tool. A very fine blade consisting of small needles in a row is formed, which is impregnated with ink. The very thin blade is used to deposit pigment to the epidermis in small strokes, mimicking the appearance of individual hairs.

It is true that during the procedure, the client will feel discomfort, pain or pressure. It most likely can be compared to eyebrow threading or waxing or cat scratches. While some clients do not feel anything and fall asleep and just wake up after the procedure. It’s normal to feel some discomfort or pain and by using Irina Chen First Step Tool, it is guaranteed that there will be minimal pain plus the results will be more realistic.

To create fuller and natural-looking eyebrows as dreamt by everyone, you must go for microblading tools used by microblading professionals, microblading master trainer and those promoted by reputable microblading organizations such as World Microblading.

To check-out the wide-array of microblading supplies offered by World Microblading, visit our shop here: https://buymicrobladingsupplies.com/