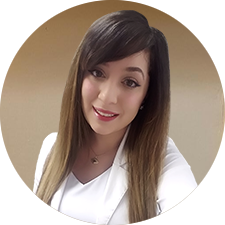 Elin was working in a salon when she found a before-and-after photo of Microblading. She thought it was so natural and so real that she also wanted to learn how to do it. She took a five-day program of Microblading and it was the best decision she has made in her life. She realized that if she had not taken the class, then she would have been still working in the salon and all her earned money would just be used to pay her bills. She would not be able to enjoy life after work or even be able to travel. After a month of practicing her skills, she was able to open her own shop and be her own boss. Now she does not have to work in a salon for long hours, not getting paid for overtime and have someone else dictate her on what she needs to do.

Choosing to be a Microblading trainer changed her life. Her passion, patience and genuine care to her students are the remarkable traits of Elin. She pursued this career because she wanted to share her knowledge and be able to change other people’s lives as well. It was all worth it knowing she was part of changing their lives and that her students would also have the ability to change someone’s life. It was not easy for her as she was a foreigner, but she has the innate skill, talent and heart in teaching which made her a successful Microblading trainer and a young entrepreneur. She was grateful to the struggles she went through which motivated her to pursue her dreams in life and got her to where she is right now. Now, she enjoys the financial freedom of being able to do what she has always been dreaming of. This career helped her financially to be able to deposit money and to plan her Switzerland trip for three weeks. She has control over her own time. She can pursue her dream to travel and explore the world.

Microblading is both a career and a passion. It felt like work in the beginning, but after practicing and perfecting her skills, she found it fun and entertaining. It was not easy for her to find her path and be successful especially in a foreign country such as the United States. Microblading, to her, is a fun way to make a living. And it is not easy to find something you find fun in your life. A lot of times, we are forced to do something that we do not want to do. It seems like life makes people think that people do not have a choice to choose what they want to do in life. But Elin was different. She never gave up. She tried to remember her goal and the reason she took the class. She looked back and the only thing she wanted to do if she could return back time was to learn Microblading a little bit earlier that she did. She was very passionate in her career. She felt great about it and was able to enjoy financial freedom and that made Microblading as a career worth it.

Being a Microblading trainer took Elin’s career to the next level. Currently, she is one of the World Microblading’s best trainers and her students certainly recommends her.

You too can enjoy the highest paid career in the beauty industry and set yourself up for success – just like Elin!

If you want to learn more about how to Become a Microblading Trainer, join our free training and sign-up today.